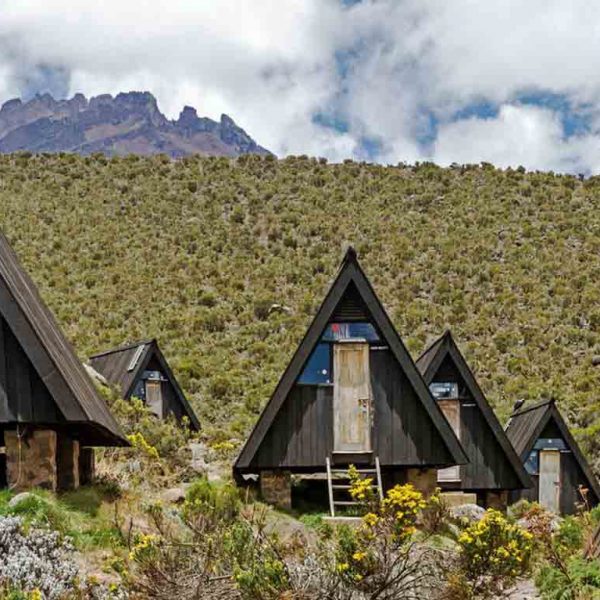 The Marangu Route is also known as the “Tourist Route” and the “Coca-Cola Route.” This is because Marangu is the most popular route on the mountain, and thus is considered “touristy”, and because the route is the only one that offers sleeping huts, which serve beverages like Coca-Cola, on the way.

Marangu is the easiest route on Mount Kilimanjaro. It’s ascension profile is very gradual and steady, allowing for painless trekking for most of the way. However, due to its reputation as an easy route, Marangu is often selected by unprepared, unexperienced climbers. Correspondingly, only about 35% of the people actually make it to the top.

The trek begins in the south-east area of the mountain at Marangu Gate. The route takes five days minimum to complete, although six days is more practical and recommended. The sleeping huts along the route are structures with a dining hall and bunk beds, equipped with mattresses and pillows. The descent is done on the same path, contributing to Marangu’s overcrowded feeling. It is a cheaper climb as well, do to the close proximity of the gate to Moshi, the gateway town, and because it is a shorter route.

Scenically, Marangu is not a desirable route compared to all the other routes because it confines climbers to one area of the mountain, thus limiting the variety. However, Marangu has the best trail in the rainforest section of the trek. Of course, there are still great views of the Mawenzi and it’s equally spectacular for everyone at Uruhu.

Marangu is ideal for those who are not confident in their ability to hike over steeper paths. It’s also attractive for those who do not want to sleep in a tent. Marangu’s huts offer shelter and warmth against the weather so it is a decent choice when climbing during the rainy season. Marangu is for those who want to spend less on their climb, and do not mind crowds. 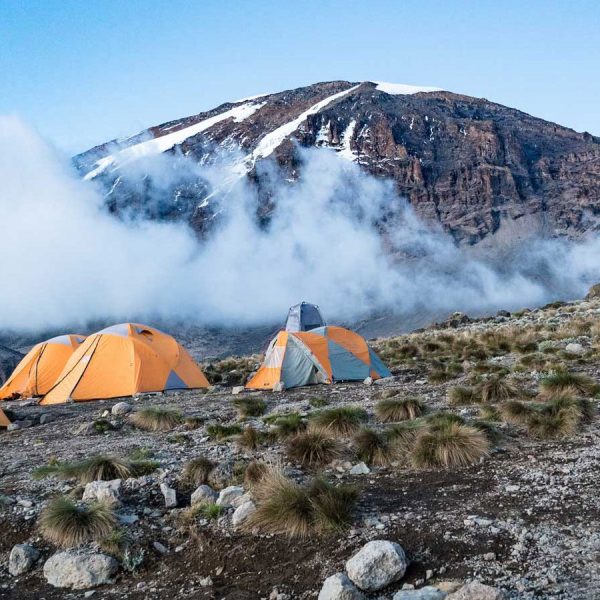 Below is the day by day itinerary for the eight day Lemosho route on Mount Kilimanjaro.

The eight day Lemosho route variation is the ideal schedule for this route. On the 8 day Lemosho route, the trek from Barranco to Barafu is broken up into two days, allowing for a short day just prior to the summit attempt. This is important because summit day begins very early, around midnight, so climbers are sleep deprived going into the toughest day on the mountain. By having a short day beforehand, climbers can be better rested. 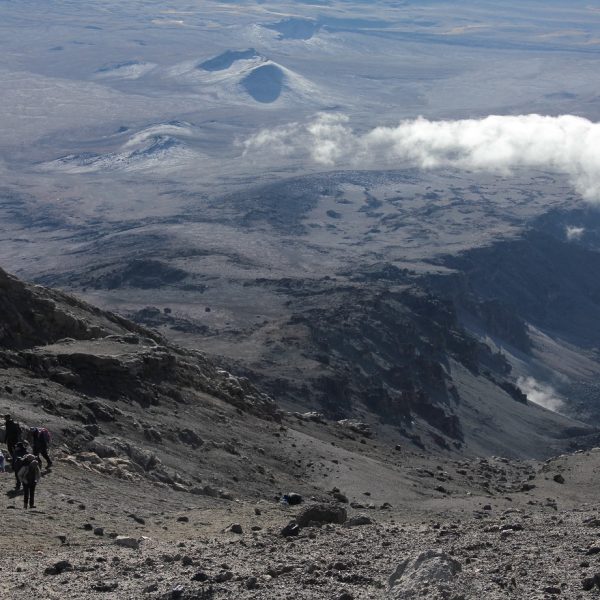 Below is the day by day itinerary for the 7 day Machame climb on Mount Kilimanjaro.

The seven day Machame variation is the ideal schedule for this route. On the 7 day Machame route, the trek from Barranco to Barafu is broken up into two days, allowing for a short day just prior to the summit attempt. This is important because summit day begins very early, around midnight, so climbers are sleep deprived going into the toughest day on the mountain. By having a short day beforehand, climbers can be better rested. 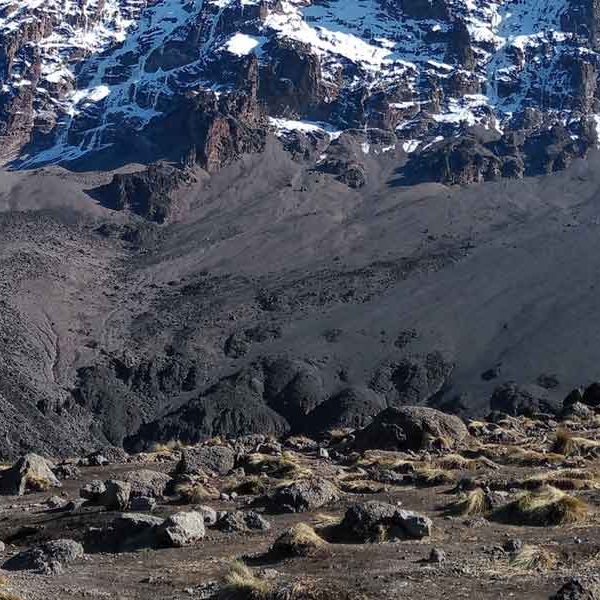 The Shira Route is a difficult route that begins in the west, at Shira Gate. What is unque about Shira is that the first section of the trail is not hiked, but rather driven. Therefore, climbers using Shira will miss out on hiking up one of Kilimanjaro’s ecological zones, the rain forest.

An off road vehicle transports climbers to the Shira gate, located at 11,500 feet, where the hike begins to Simba Camp. This is a sizable altitude gain for someone who slept at Moshi or Arusha on their previous night. Complications from altitude can occur due to failed acclimatization.

The route takes six days minimum to complete, although seven days is recommended. The descent is down Mweka, in the south-east. Because the starting point is far from Moshi and Arusha, it is more expensive to climb this route due to the added transportation cost of getting climbers to the gate. Scenicaly, Shira is beautiful because it crosses the spectacular Shira Plateau, and then combines with the Machame route to share its viewpoints around the southern circuit. Shira has low traffic until it combines with Machame.

Shira is ideal for those who are confident in their ability to acclimatize to altitude, and to walk over steeper paths for extended periods.

Located to the east of Arusha town, about 20 kilometers drive from Arusha; Mount Meru is the second highest mountain in Tanzania. The mountain stands at an altitude of 4566 meters above sea level inside the Arusha National Park.

Meru has one route to the top and can be attempted for three days but we highly recommend doing for four days for acclimatization. Most alpines uses Meru for acclimatization before the Kilimanjaro climb. The mountain has less snow formed at the volcano eruption.
Unlike Kilimanjaro when you are climbing the Mount Meru you have to be escorted by an armed ranger(s) as you pass through the Arusha National Park. It is at this time when you will enjoy the walking safari as you pass the groups of African buffaloes, Zebras, Black andwhite colobus monkey just little wildlife to mention.

The Momela and Ngurdoto Lakes are rich in birdlife as you trek to the mountain; birds like Pelicans and Flamingo are closely seen.

Upon arrival to Kilimanjaro International Airport, you will be met and transferred for overnight accommodation at Kilimanjaro. Your head guide will meet you for your briefing, gear check and arrange for you to hire any equipment you may need. 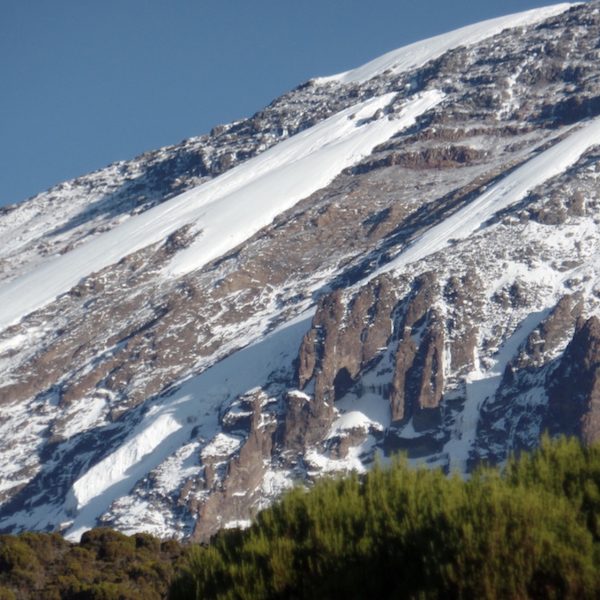 The umbwe route is a short, steep and direct route. It is considered to be very difficult and is the most challenging way up mount Kilimanjaro. Due to the quick ascent, umbwe does not provide the necessary stages for altitude acclimatization. Although the traffic on this route is very low, The chances of success are also low. The route is is offered at a minimum six days, Though seven days is recommended when attempting this route. 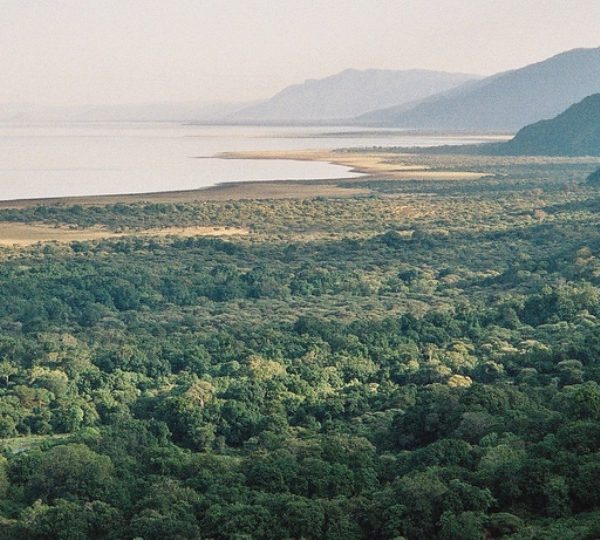 A 7-day hike through Tanzania’s most amazing craters.